My wife rides a 2008 Yamaha Grizzly 450. As I was tightening down the straps after putting it on the trailer I noticed fluid dripping off the rear skid. Damn every atv owners secret nightmare: leaking fluid. Anytime this happens, my mind runs wild with how much is this going to cost and how much time will it require.

When I got it home I looked at it closer and it appeared to be leaking out of the rear differential where the driveshaft attaches. The oil had a stinky smell. It was definitely gear oil. Anyone not familiar with gear oil it has a strong smell.

A quick search on Google and sure enough there are lots of Grizzly owners having problems with the axel seals. That is always good news. It means that this is a common problem and there is probably a fix for it.

The first tip I read online was to check to see if the vent line is plugged up.

If it’s plugged up, the pressure in the diff increases as it gets warm, and eventually pushes oil out the seals to release the pressure. I didn’t think that it was plugged up at least not on an ATV with less than 200 miles on it. I checked the vent and it wasn’t plugged up. If the vent isn’t plugged up, it is most likely the axel seal. I found the vent clean so I stopped by my local Yamaha dealer and picked up an axle seal for $8.

When owning an ATV a shop manual is an invaluable tool. I bought mine on line. 2008 Yamaha Grizzly Shop Manual.

The repair manual I picked up online didn’t specify exactly how to get to the seal. I relied upon my understanding of axels on front wheel drive cars. The axel with two Constant Velocity (CV) joints is very similar to a front axle on a front wheel drive car. Just to make sure there was nothing unusual I visited an axle website. Gorilla Axle has excellent install guides.

This is what I did to replace the axle seal.

Step 1: Unbolt the rear skid plate. It’s only three bolts to remove the factory rear skid. This makes it easier to position the jack stands under the frame when its time.

Step 2: With the wheels still on the ground I loosed the wheel lug nuts. We of course want to remove the wheel on the side of the problem axle. It is easier to crank on them while the ATV is on the ground. It is also safer because the ATV can’t fall on you. I didn’t take the lug nuts all the way off I just loosened them.

Step 3: This is an excellent time to drain the gear oil from the rear end. The drain hole is on the left side of the rear end on the lower right. It is a 17 mm bolt. If you don’t drain it when you remove the axle it may leak out. If you are replacing the seal you might as well replace the fluid as simple maintenance. It takes less than a quart and costs around $6.

Step 4: Jack up the ATV. I used a standard car floor jack and car jack stands. They are easily purchased at Wal-mart or Sears. I used the rear hitch as a lifting point for the jack. I also used a piece of 2 x 4 to protect the frame.  I put two jack stands on the frame under the engine.

Step 4: Once the ATV is up on the stands and secure finish removing the wheel.

Step 5: Save some time and effort on this. Since I wasn’t replacing the axle but merely replacing the seal I elected to take a short cut and not remove the hub assembly etc but instead I unbolted the axle knuckle from the A-arms. It will spin freely on the axle. Be sure to mark the top as it has a top and bottom. If you install the knuckle upside down upon reassembly the axle will be at an extreme angle.

Step 6: If you remove one of the shock bolts and move the axel and A-arms level with where the axle enters the transfer case, it is easier to remove the axle. The axle will pull out with a little bit of effort. The axle is splined for about 4 inches where it goes into the gear box. It is a tight fit. Pull hard it will come out. I sat down facing the ATV and put my feet against the frame and pulled the axle out. The CV joints are designed to move in and out so don’t panic if you pull the axle longer it’s made to do that.  The Grizzly uses the same axle front and rear. The CV joint is made to shorten and lengthen so that it can accommodate turning.

Step 7: Once the axle is removed you can see the seal inside the hole where the axle was removed. I bought a seal puller at Harbor Freight for $5. Be careful not to scratch the surface where the seal sits. You may have to pull on it on a few positions to get it out.

Step 9: Put the seal in gently. Make sure it goes in evenly. It may require a light tapping from a punch using the large flat end in an alternating pattern to seat it correctly. I used a block of wood I cut to the size of the seal. Make sure it is flush with the outside of the case.

Step 10: Refill the case with gear oil. You will need a gear oil pump due to the extreme angle of the filler bolt in the frame. I purchased one at Autozone for $6. Fill the case until it begins to drip out the axle hole. Recommended oil: SAE 80 API GL-4 Hypoid gear oil Oil quantity: 0.50 L (0.44 Imp qt, 0.53 US qt) or 1 cup. DO NOT OVER FILL.  It will cause the gear oil to foam and will get extremely hot very quickly.  You can easily fry your differential.

Step 11 Reinstall the axle. It will require some effort to line the splines. I made my best guess and lightly tapped the end of the axle with a rubber mallet to get the splines to line up. Be careful not to damage the seal.

Step 12: Line the knuckle bolts back up in the A-arms. Torque the bolts to the proper specs of 32 ftlbs. If you install the knuckle upside down the axle will be at an extreme angle. This is not good for CV joint life. BE CAREFUL to reinstall it properly.

Step 13: Reinstall the wheel and tire. Reinstall the skid plate and lower the ATV onto the ground. Torque all the lugnuts to 40 foot pounds..

After the install ride the bike for a bit and check for leaks. I also recheck the lug nuts after the test ride. 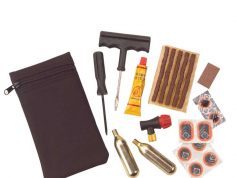 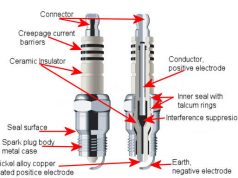 11 Things Your Spark Plugs Are Telling You

How To: How I Preform A Utility ATV Front End Alignment: