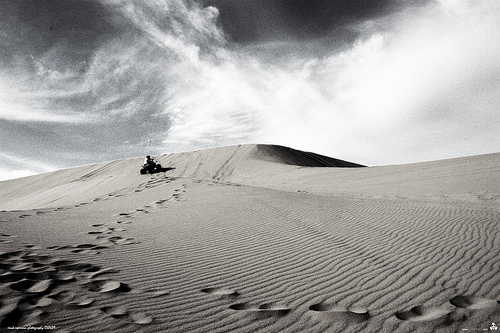 It seems as though we seldom have good news to tell you, but the Nellis Dunes National Off-Highway Vehicle Recreation Act of 2009, H.R. 765, has the potential of becoming very good news for OHV enthusiasts living in the Las Vegas area. The legislation, sponsored by Representative Dean Heller of Nevada, would create an OHV recreation area of more than 10,000 acres by using lands owned by Clark County and the Bureau of Land Management. The legislation would authorize the conveyance of approximately 1,200 acres of BLM land to Clark County so the County can develop an active off-highway vehicle recreation park. An additional 9,000 acres would be designated as an off-highway vehicle recreation area to be managed by BLM.

The House Subcommittee on National Parks, Forests and Public Lands recently held a hearing on H. R. 765. Further action on the part of the full Committee is required before this legislation can move forward. A portion of BLM land would also be transferred to the Nellis Air Force Base, so the legislation must also be reviewed by the House Armed Services Committee before it can be sent to the full House. We will keep a close eye on this bill as it moves forward in the House of Representatives and hopefully in the Senate. In the meantime, OHV enthusiasts will have to wait for final action. It’s sort of like Christmas for a child; waiting only makes Christmas morning all that more exciting.

Thanks to all the ARRA members who weighed in on this important legislation in response to ARRA’s alert. We appreciate your involvement. Source: Americans for Responsible Recreation Access