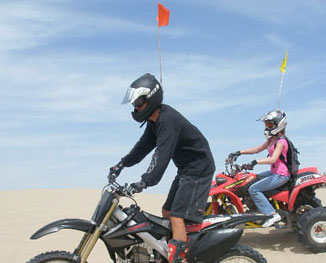 The Utah Legislature passes a bill that will allow dirt bikers and atv riders to attach a flag to their helmets instead of polls on their off road machines.

Flags are required when riding on certain sand dunes across the state to help make riders more visible.

West Valley City Sen. Brent Goodfellow’s bill originally was killed in the Senate but the House passed it 66-5 and is now on its way to Utah Governor Gary Herbert’s desk to be signed into law.

Goodfellow says that the long poles sometimes hit people in crowds and aren’t always visible to other riders because they bend down while in motion especially under acceleration.

A Utah Company helmetflag.com is selling these flags.